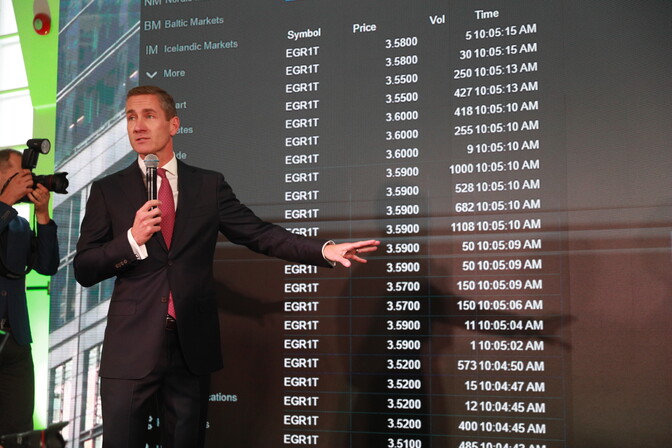 The Baltic stock exchanges are experiencing serious growth. In one year, the Baltic stock index has risen by more than 60 percent, mainly because of Tallinn.

SEB private banking strategist Peeter Koppel said the exchange is quite small and people have a fair amount of money. “And it may have finally hit them that money printing means asset price inflation,” the strategist said.

Nasdaq Baltic CEO Kaarel Ots admitted that 2021 has been an extraordinary year for the stock market. “This will go down in the history of the stock market for several reasons. We probably have the most transactions. The overall market value of companies will be the highest ever. And the turnover will not break any record, but it will be very- very decent, ”Ots said.

“Because interest rates are so low, the money deposited hardly increases or inflation eats away at it. People are looking for a place to deposit their savings. And it went public, ”said Rain Leesi, fund manager of Avaron Asset Management. .

The number of listed companies is also increasing. While three companies join the Baltic Stock Exchange each year, there will be ten this year.

LHV’s bank brokerage director Sander Pikkel said the Tallinn Stock Exchange has taken off. “We haven’t seen such an involvement in years. Other companies are coming and I hope this activity continues in the future,” he said.

Stock prices may also continue to rise. “As long as more money is printed, the whole world is in a situation where there is more money with more risk to run after lower productivity. So asset prices can go up,” Peeter said. Koppel.

Rain Leesi referred to the previous boom. “If we take a historical look, there were great developments in 2005-2007. There were a lot of new companies listed on the Tallinn Stock Exchange, stock prices continued to rise, but we all know what happened a few years later, ”Leesi said.

Enefit Green’s initial public offering (IPO) saw more than 60,000 retail investors subscribe and the IPO was oversubscribed by four after the IPO. 55% of the shares were allocated to retail investors and the remaining 45% to institutional investors.

Nasdaq Tallinn CEO Kaarel Ots said on Thursday that more than 4% of Estonia’s total population participated in the IPO. “This is an absolute record for the Estonian and Baltic stock exchanges,” Ots said.